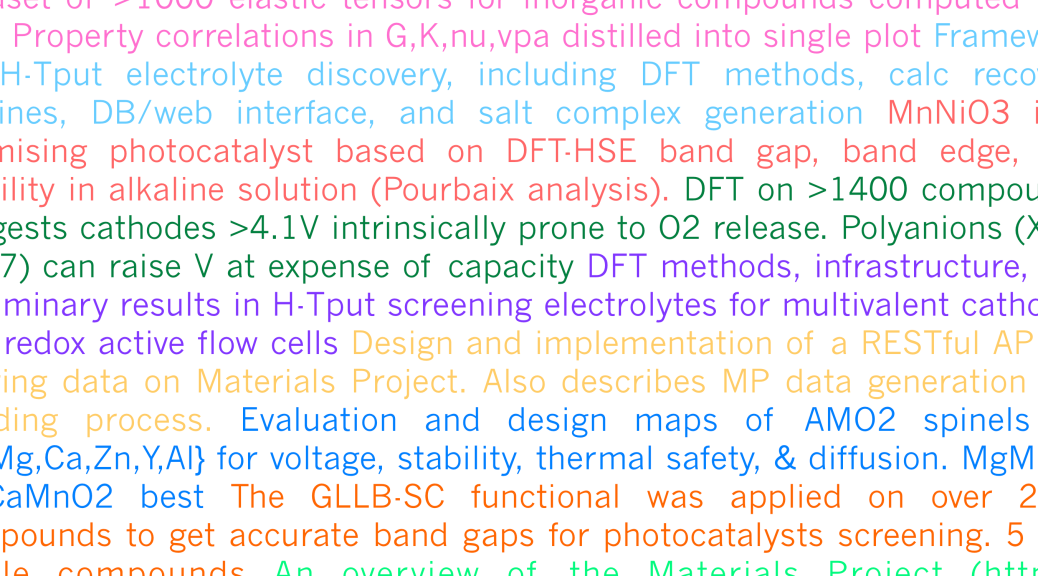 It seems that whenever I meet up with old colleagues, I eventually find out that they are working on a topic that (i) I had no clue they were interested in and (ii) that somehow relates to my current research. Perhaps a “battery person” is now studying solid state lighting, or a “DFT person” started using classical MD simulations. There has to be a better way to keep up!

Indeed, there are nowadays many tools (like Google Scholar) to help researchers discover relevant papers. But rather than talk about what I feel is missing from these tools, let me instead show you what I wish existed on a larger scale:

If you click that link (go ahead, it won’t bite), you’ll see each of my research papers distilled into a summary tweet of 140 characters each plus a second “business” tweet with the paper link/reference details. Given that each summary tweet is ~20 words and I’ve contributed to 32 papers, you can now read about every topic I’ve researched thus far in only ~650 words! The information content is extremely dense.

If you were to follow that feed, you would stay up-to-date on new topics like thermoelectrics and materials informatics that I plan to publish on soon, but that would be difficult to anticipate based on knowledge of my past research topics. Maybe there’s no overlap between our research today, but that’s often not a good predictor for future research intersections – at least that’s been the case with some of my colleagues.

Hopefully, you’re now thinking one (or both) of the following:

If so, maybe you want to already skip to the last section. But in case you need more convincing, here are a few more thoughts on the subject.

At this stage, you might correctly point out that many research groups already have Twitter feeds, and I’m a bit late to the party. Indeed, when I was signing up for Twitter, I was encouraged to follow some of them. But I didn’t want to follow those research feeds because they used Twitter in pretty much the same way that everyone else uses Twitter; namely, they post a lot (maybe about conference travel, maybe about external articles in their field). When they did announce a publication, it felt like just that: an announcement rather an informative paper summary. I’m sure this is already useful and interesting for many people, but I personally want an inverted (and introverted) Twitter, where posts are either “high-value, high-specificity” summaries of new papers from that research group or nothing at all. The idea is to keep it to around 10 posts per year(!) for someone that publishes at my current rate; in other words, nothing like most Twitter feeds. You could subscribe to 35 different research group feeds like mine and still receive only one tweet per day. The goal is not to feel pressure to keep your audience constantly engaged with updates. Hopefully, engagement will come from the availability of multiple different feeds.

For early adopters, the total payoff for being a follower will perhaps not be so great; with only a few groups posting (and maybe just me!), you’ll only get very sporadic updates. But the goal is that at every step of the way – and even in the beginning when the total payoff is not so large – the ratio of payoff to time invested will still be large because each tweet will be highly relevant/informative and take only seconds of your time. And the value will only continue to grow if more authors start feeds.

Besides, it’s supremely easy to follow and unfollow! So it’s an easy experiment to try out for a bit (understanding that things might be quiet at first).

Why This Could Be Good for Authors

From an author’s perspective, potential payoffs include broader dissemination of your work, added citations, and maybe new collaborations. Again, the total payoff might be big or small depending on the number of followers you get and who’s following your stream. But the time invested (140 characters per paper) is miniscule compared to other modes of broadcasting your research (e.g., traveling to a conference and filling out expense reports, or recording a video slideshow as some journals are now experimenting with). Thus, the ratio of payoff to time invested will be favorable even with a small number of followers and could become astronomical with a large number of followers.

How to get started as an author

If you’re on board, here are my suggestions for getting started:

Congratulations! You now have your own feed and can start broadcasting. A few other notes:

There are plenty of other built-in tools that could potentially be useful (Twitter lists, retweets, hashtags, etc.), but those will only become relevant if this spreads. If you do end up starting your own Twitter feed, and in a way that meets these guidelines (i.e., not your typical Twitter feed), please let me know – you might even get your first follower!

[1] If you’re really savvy, you might prefer to link to DOIs rather than journal-specific URLs (I didn’t go that far).
[2] You can modify the “paper:” part of my example with “#paper” or “#publication” to be more in-line with how others use Twitter.
[3] The self-reply method links your “business tweet” and “summary tweet” together by a blue line.

3 thoughts on “The Materials Twitter Project: All my research papers in 140 characters or less”

Add to the discussion! Cancel reply